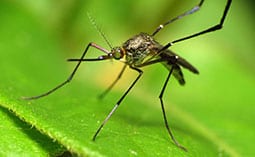 What do mosquitoes look like and why are they concerning?

Mosquitoes are flying insects that have slender bodies and long, thin legs. They have a single pair of wings and their head features a prominent proboscis. The size of a mosquito depends on its species, but most range from 3 to 9 mm long with few being longer than 15 mm.

Male mosquitoes feed on plant nectar, while most female species feed on the blood of humans and animals. There are some species, however, whose females feed on plant nectar like their male counterparts. Crane flies look like giant mosquitoes, and are often said to be male mosquitoes. In reality, crane flies are not mosquitoes at all and are only somewhat related. Midges are frequently mistaken for mosquitoes, but are also only somewhat related. A way to distinguish between the two is to look for the scaly bodies and wings that are characteristic of mosquitoes. Besides being a major nuisance, mosquitoes can be quite dangerous. They are known to carry and spread many human diseases, including encephalitis, the west nile virus and zika virus. 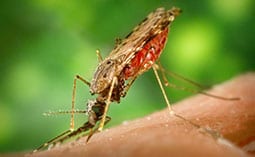 Where do mosquitoes live?

Mosquitoes thrive in hot, humid environments and most commonly infest wetland habitats such as ponds and swamps. However, they are capable of infesting practically anywhere that has a source of stagnant water in which to lay their eggs.

Some examples of stagnant water around human living spaces are puddles, birdbaths, and containers that collect rainwater. Generally, mosquitoes will rest in some form of vegetation during the day. If they make their way into a home through an open door or window, they will hide in dark, hidden areas like in closets or under sinks. They will emerge at night in search of a blood meal. 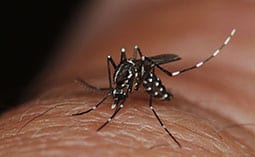 Why do I have a mosquito problem?

Mosquitoes are attracted to damp, hot climates. They look for any form of stagnant water, as that is where they lay their eggs.

At certain stages of life, they also feed on some types of particulate matter that are in water. Any properties that are near a pond or marsh, or those that have some form of water accumulation are at risk for a mosquito infestation. 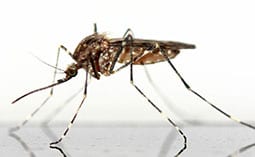 When are mosquitoes active?

Mosquitoes are active during the warmer months of the year, preferring temperatures around 80 degrees Fahrenheit. Infestations happen more frequently during wetter seasons.

Mosquitoes do not like temperatures lower than 50 degrees Fahrenheit, so their activity will typically cease once cooler weather arrives. Depending on the species, they will either spend the winter as eggs which hatch in the spring or as adults living in caves, cellars, and sewers. However they spend the winter, mosquitoes will begin their activity again once temperatures are consistently 50 degrees or higher. Because of this, southern states like Florida will typically see mosquitoes sooner and in higher numbers than in northern states. 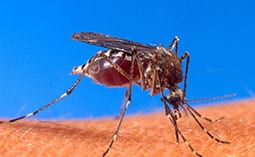 What’s the best way to prevent a mosquito infestation?

In order to avoid or reduce a mosquito infestation, it is imperative to remove as many sources of stagnant water as possible. This means disposing of cans, buckets, ceramic pots, and other similar containers that hold water, or relocating them to a place where they cannot collect rainwater.

Outdoor recycling containers should have drainage holes in the bottom. Turn over wheelbarrows and wading pools when they are not in use, and do not let water stagnate in birdbaths. Gutters should be cleaned every year, particularly if the leaves from surrounding trees tend to clog them. Aerating ornamental pools or stocking them with fish will help prevent mosquitoes from taking a liking to them. Swimming pools should be cleaned and chlorinated regularly and any water that may collect on pool covers should be removed. To get rid of mosquitoes around your property call EXCEL and ask for the mosquito control program today and have one of our experts visit you.