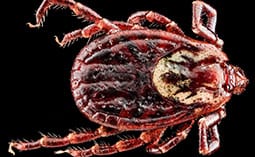 What do ticks look like and why are they concerning?

Ticks are arachnids that have six legs while larvae and eight legs while nymphs and adults. While flat normally, after a meal their bodies expand considerably. Both males and females feed on the blood of animals and humans, but only females will take enough blood to become engorged.

The appearance of a tick depends on its species. Three of the more common tick species in the U.S. are American dog ticks, deer ticks, and lone star ticks. American dog ticks, also known as wood ticks, are grey in color. Adult females are about 5 mm in length, but can grow to be 1.5 cm in length after feeding. Adult males are about 3.6 mm in length. Deer ticks, also known as blacklegged ticks, are usually brown as males or red and brown as females, but may become brownish-red or rust colored after a feeding. Males are smaller than females. Females are between 3 and 5 mm long normally, and can grow to be about 10 mm long when engorged. Deer ticks are generally half the size of American dog ticks. Lone star ticks are easily recognizable by the markings on their bodies. Females have a white dot on the center of their back, and males have white streaks around the edges and top of their body. Ticks carry and transmit diseases like Lyme disease, Rocky Mountain spotted fever, and anaplasmosis. According to the CDC, tick-borne diseases have more than doubled in the last 13 years. In some cases, American dog ticks can cause paralysis in dogs and children when they attach to the base of the skull or the spinal column. The paralysis, which is caused by a toxic secretion, usually goes away within 24 hours after removing the tick. 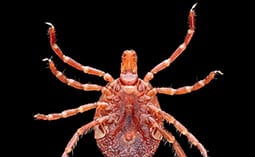 Where do ticks live?

Ticks prefer moist, humid areas, but they are able to adapt to many different types of environments. They generally live close to their host, whether it be pets, humans, deer, birds, or livestock.

Ticks do not live on their hosts. Once they are finished feeding, they detach and look for another host or a place to molt. They usually live outdoors in grassy, wooded, or highly vegetated areas. Typically, ticks will not infest a building or structure, but the brown dog tick does reproduce indoors. If they are indoors, ticks can be found hiding in cracks and crevices, or in their host’s nest or burrow. 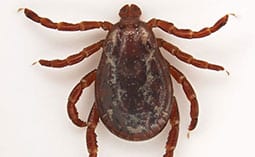 Why do I have a tick problem?

Ticks cannot fly or jump, but they can easily latch onto fur, clothing, and skin. A tick can grab onto a host that simply brushes up against a tree or tall grass where a tick is waiting.

Because of this, it is common for them to latch onto, and be brought inside by pets and humans that walk through their habitat. They may also be brought inside by pests like mice and rats. Generally, ticks stay outdoors with brown dog ticks and some soft ticks being the exceptions. Brown dog ticks like to reproduce inside and some species of soft ticks will invade buildings in search of a host. 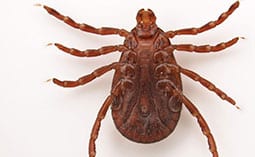 When are ticks active?

Ticks can be a problem year round, but they are most active during warmer months, usually between March and November.

They are capable of being active any time the temperature is above freezing, so although they are not typically very active during the winter, they may emerge on warmer days. 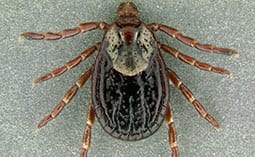 What’s the best way to prevent a tick infestation?

In order to limit the possibility of tick exposure, it is important to remove as many potential habitats around a home or business as possible.

This means removing leaves from the ground, relocating woodpiles to sunny, dry areas, and trimming all shrubs, low branches, and tall grasses. It helps to landscape with natural tick repellents, like American Beauty berry bushes, and create a woodchip or gravel border between the lawn and any tick-heavy, wooded areas. Wear long sleeve shirts and long pants any time you are in a wooded or high-brush area, and treat all clothing, shoes, sporting gear, and tents with a clothing-only tick repellent that contains at least 0.5% permethrin. To get rid of ticks around your property call EXCEL today and have one of our experts visit you.