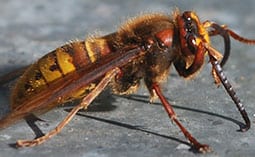 What do wasps look like and why are they concerning?

There are over 100,000 species of wasps around the world. The most commonly encountered species in the U.S. are hornets, yellow jackets, and paper wasps.

Hornets are a very large type of wasp and are similar in appearance to the yellow jacket. They have four wings and six legs, along with a rounded abdomen and a thin waist between the thorax and abdomen. The area of their heads that is directly behind the eyes is wider on hornets than other wasps. Hornets are generally black and white. Yellow jackets are smaller than hornets, with wings that, when at rest, fold laterally along their bodies. They also have elongated, thin waists. Their bodies are black and yellow in color, and they have yellow legs. Adults are between 3/8 of an inch and 5/8 of an inch in length. Paper wasps are slender and narrow-waisted, with brown wings. They can be between ¾ of an inch and 1 inch long, and they are golden brown with yellow markings. Wasps may sting when they feel threatened. Multiple stings can be dangerous if not treated, and a single sting may cause anaphylactic shock in those with allergies. 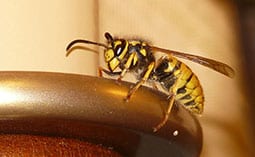 Where do wasps live?

All wasps build nests, which are paper-like and made from wood fibers that have been chewed to a pulp.

Wasps like to make their nests close to houses, usually near openings that lead inside. They may build in trees, chimneys, attics, and wall voids, or under eaves, overhangs, and rafters. 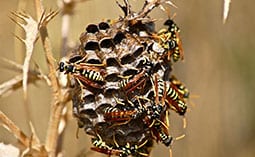 Why do I have a wasp problem?

Wasps may enter a building if their nest is on or in it. Generally, they enter homes and businesses if their nests are in chimneys, attics, wall voids, or other similar indoor locations.

Otherwise, they can get in through any small gaps and spaces, like those around doors and windows. If their nest is not indoors, they may still enter a building in search of food or a place to spend the winter. If the opening to their nest is sealed, they will become angry and chew through the wall or ceiling their nest is attached to, usually ending up indoors. 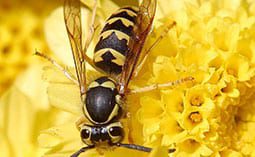 When are wasps active?

Wasps are most active during the summer. The queens that survived the winter emerge and begin to build nests in April. They then populate their new nests with eggs that were fertilized the previous fall.

These eggs hatch into infertile female workers who then build the nest larger so the queen can lay more eggs in May. The cycle of nest expanding and egg laying repeats over and over for the rest of the summer. June and July are the months when nests reach peak activity levels. Between August and October, activity begins to slow down, as workers die and queens lay fewer eggs. During this time, the queen will lay eggs that hatch into fertile females and males. The queens will die and the new fertile wasps will mate. The new queens will find a place to spend the winter, and the males will die off. 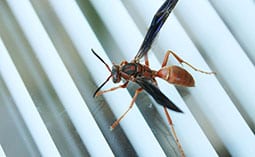 What’s the best way to avoid a wasp infestation?

In order to avoid a wasp infestation, it is important to eliminate any sources of attraction. This means cleaning up crumbs and food spills, sealing garbage cans and compost containers, and moving hummingbird feeders away from the outside of the building.

Seal any cracks or openings to prevent wasps from coming inside, and cover or fill any holes in the ground. Position wasp repelling plants around your outdoor living areas. Such plants include basil, geraniums, marigold, mint, pennyroyal, and wormwood. Check for nests routinely, especially during the spring when they are still small. To get rid of wasps nests around your property call EXCEL today and have one of our experts visit you.