A Guide to Identifying and Preventing Stink Bugs
Skip to content 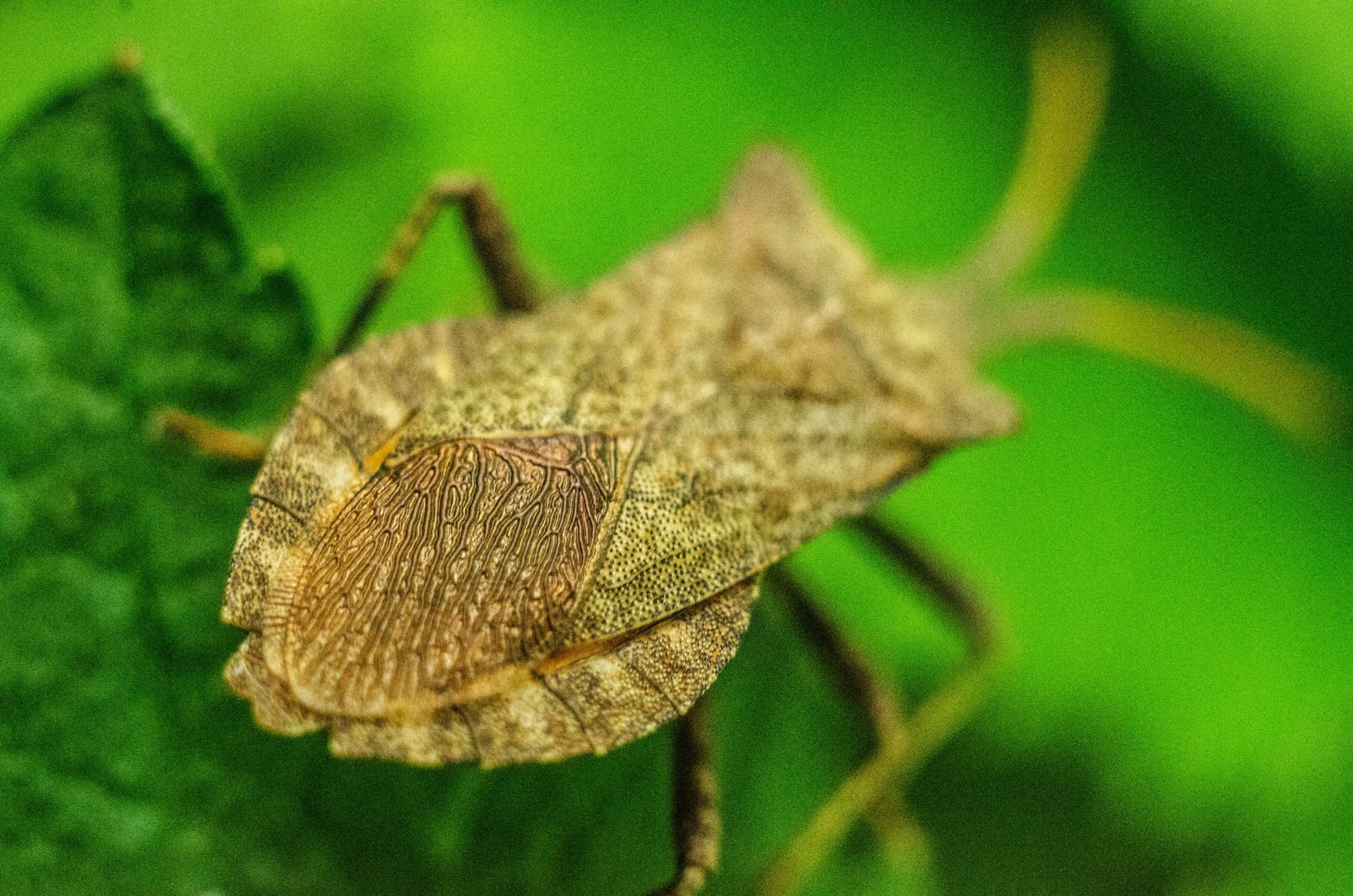 A Guide to Identifying and Preventing Stink Bugs

Stink bugs are perhaps the most aptly named pest of all because, well, they stink! In more ways than one, too. In addition to their odor, they infest our homes and businesses, and many species wreak havoc on crops and gardens. Unlike other pests, though, some species of stink bugs are beneficial. This guide can help you identify which species you’ve encountered so you know whether they are a friend or foe.

There are more than 4,500 species of stink bugs all together, and approximately 200 of those species live in North America. All stink bug species have a characteristic shield shape, with some appearing more triangular and others more rounded. Adults tend to be somewhere between 1/3 inch and ¾ inch long. The bugs have one pair of segmented antennae, two pairs of overlapping wings, and three pairs of legs. They have piercing and sucking mouthparts, which they use to suck the fluids out of whatever they are feeding on. Most species feed on vegetation, and can cause significant damage to crops and gardens. Some species, though, feed on other insects that are known to be damaging to crops. Of course, all stink bugs have the scent glands that secrete their namesake odor. These glands are located on the thorax and release a foul smell when the bug is agitated or squished.

Now that we’ve taken a look at what stink bugs are like in general, let’s look at how to identify some of the most commonly encountered species- starting with the harmful ones.

The brown marmorated stink bug is one of the most common species of stink bug in the United States. Nymphs hatch at around 2.4mm in length. They have black heads and thoraxes, and their abdomens are orange-red with black markings. As they grow, their bright colors darken and they become black or gray. They also start to grow spiny projections on the edges of their thoraxes, and white bands form on their antennae and legs. As their name suggests, adults are brown in color. In contrast, their undersides are white. The triangular-shaped bodies of adult brown marmorated stink bugs are roughly 5/8 inch long. Their antennae each have a white band around the 4th segment, and their legs are brown with faint white bands. Brown marmorated stink bugs are most active during the fall months.

Forest bugs, quite predictably, live in forest areas around the globe. Larvae are tiny and dark in color, and they get lighter in color as they grow. Adults have triangular-shaped bodies. Their shoulders are very distinctive, being square-cut and almost rounded at the front, unlike other species who have pointed shoulders. Their bodies are brown with orange and reddish markings. They have orange legs, which give them the nickname “red-legged shieldbugs.” Forest bugs feed on the sap of oak trees and nut bearing trees, as well as fruit and occasionally other insects. Adult forest bugs are most active from July to November.

Harlequin bugs are found all across the southern United States, and are not typically seen north of Pennsylvania and Colorado. Nymphs start out being pale orange in color. As they grow, their heads get darker and darker until they are eventually black. The colors of their thoraxes and abdomens get showier, ending with a pattern of red, yellow, white, and black. Their antennae, which are colorless originally, darken to black. Adults are usually around 9.5mm in length, and their bodies are spotted with red and black. While at rest, the adult harlequin bug’s wings overlap on its back, creating a distinct X mark. Harlequin bugs feed on crops like turnips, collards, cauliflower, horseradish, and cabbage. They are most active during the summer, beginning their activity in March or April.

Rice stink bugs are found in many different areas of the United States, including New Jersey and Florida. When nymphs hatch, they are red and black in color. As they grow, their base color becomes lighter and they develop elaborate red and black markings. Adults are typically between 3/8 and ½ inch long and are golden in color. Their shoulders have prominent, forward-facing spines. They are aptly named, as they prefer to feed on rice plants. They may also feed on other plants, though, including sorghum. Rice stink bugs begin activity during April and May and remain active until cooler weather arrives, usually around October.

As their name suggests, southern green stink bugs can be found in southern states, including Florida. Nymphs change quite a bit in color throughout their growing period. When they hatch, they have red eyes and are yellowish in color. Their legs and antennae are colorless. As they start to grow, their head, thorax, and legs turn black. Their antennae become red and black, and their abdomens become red. They also have a yellow spot on either side of their thorax. As they get larger, they start to develop a yellowish green color with red spots down the middle of their backs. Adults tend to be between 12 and 13 mm in length. They are dull green in color with black dots on either side of their abdomens, and their eyes are black or red. They feed on developing fruit and plant shoots. Southern green stink bugs become active and mate as soon as the warm weather arrives in the spring. The new generation is most active between May and August.

Although many stink bug species are damaging to crops and gardens, there are some species that are agriculturally beneficial. The following two species of beneficial stink bugs are commonly encountered in the United States.

The spined soldier bug can be found throughout the United States. Nymphs start out red and black in color before developing white, orange and red abdominal markings. Soon they develop red, black, and white abdominal markings, as well as prominent wing pads. Adults are generally about 1.5cm in length and they have characteristically pointy shoulders. They are yellow, beige, or brown in color and have black spots. They prey on caterpillars and insects that are damaging to crops and gardens. Spined soldier bugs are active from April to October.

Two-spotted stink bugs are typically found in the northwestern part of the United States. Nymphs are pale yellow or red-orange in color. They have two black spots on their thoraxes, and a black marking in the shape of a “Y” on their shoulders. Adults grow to be between 10 and 12mm in length and have rounded shoulders. Their head and legs are black, and they have a background color of orange, red, or tan. Their black markings consist of two distinct spots and a keyhole shape, as well as a bell-shaped pattern. They mainly prey on the Colorado potato weevil. Two-spotted stink bugs are active between late May and October.

Whether they’re beneficial or not, stink bugs are not exactly pleasant to have around. Here are some tips on how to keep stink bugs out of your home or business.

Stink bugs can enter via any spaces big enough for them to fit through, so it is important to seal any gaps behind chimneys and around doors, windows, utility lines, and appliance vents. Any cracks in foundations, outer walls, drains, or ventilation systems should also be fixed. Secure all screens tightly and wipe them with a dryer sheet to keep stink bugs from even going near them. Check for and repair torn weather stripping, and make sure all chimneys and attic vents have screens over them.

During evenings and nights, try to minimize the amount of outdoor light. Stink bugs are attracted to light sources, so it is beneficial to turn off outdoor lights and close blinds.

To prevent Stink Bugs from entering your home or business, all potential pathways and means of entry should be eliminated. Relocate any stones and firewood away from the foundation, and maintain routine upkeep of landscape, including branches, shrubs, and weeds. Also be sure to examine items before bringing them inside from attics, sheds, or outdoor areas. Some such items include firewood, outdoor furniture, plants, grocery bags, and holiday decorations.

Like other pests, stink bugs like moisture. Because of this, it is important to limit any moisture buildup in and around homes and businesses. Fix leaky pipes and clogged drains, and make sure damp areas are properly ventilated. Fans and dehumidifiers are also great for keeping moisture levels at bay.

If stink bugs have already made it into your home or business, or are collecting around doors and windows, vacuums are the perfect way to get rid of them. You can get rid of many at once and avoid the odor that comes with squishing them. It is important to dispose of the vacuum bag right after sucking them all up though, because once they all die they will leave a residue on the inside of the bag that will stink up your home or business.

Hopefully, you never have to deal with an invasion from any species of these stinky pests. If you do, though, call EXCEL today to schedule your free home inspection, and get rid of stink bugs forever! 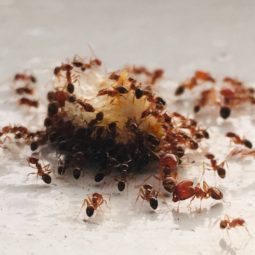 Ants Favorite Places: Guide to Identifying and Preventing Ants Nest in Your Home
None of us like ants in our homes and businesses. During the warmer months, though,...
Read More 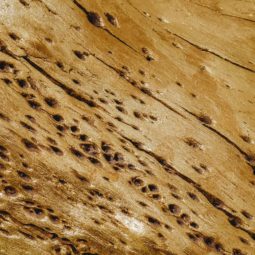 Homeowner’s Guide to Termite Treatment and Prevention
Termites are one of those pests that strike fear into the hearts of homeowners all...
Read More 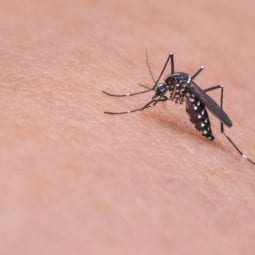 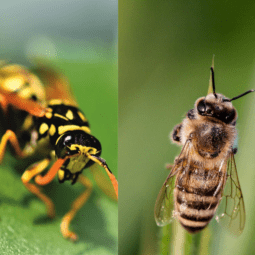 Wasps vs Bees: What’s the Difference?
Bees and wasps are both important pollinators. It can be difficult to tell the difference...
Read More